It's episode 3 of the XL Carp monthly blog and Adam Penning takes you through an extra ordinary February, one which saw a mind blowing amount of big stunning carp landed from all three of the Essex syndicate's lakes, one of the best syndicate places available.

Well if you thought last months blog was carp packed, wait till you feast your eyes on this: episode 3.

Although still in the depths of winter and the lakes been frozen over at the start of the month, February saw a mammoth amount of carp bagged from all three syndicate lakes, one of the best syndicate places available.

Featuring multiple hits of fish, braces of 40’s, smashed P.B.s and arguably THE finest carp in the UK on the bank, and much much more February was simply astounding!!!

Just like January’s blog and despite us still being in the depths of winter we have even more big carp to show you, with plenty of P.B.s smashed and some memorable catches, something this place is famed for – Fryerning has really turned on big time!

Today were sat on one of my favourite lakes, my own little bolt hole…… the estate’s majestic Valley Lake. This three acre oasis is somewhere I hold dear to my heart. It’s a place I head for whenever I want a bit of sanctuary, with a chance of catching some seriously impressive fish.

Its certainly a lake that has been very kind to me over the years and one I will continue to fish for years to come, it certainly has everything I want from my carp fishing.

Just one of a great haul from The Valley Lake last spring.

Certainly one very memorable session was in spring last year, when I landed a big hit of carp including a 32lb common, a couple of 29’s and a few 20’s as well! Just one example of just how good the fishing can be on this incredible lake! 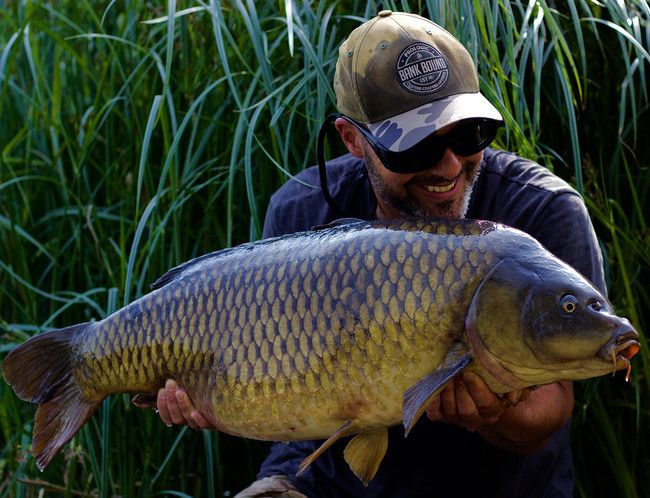 A 32 Common, caught during a hectic 36 hour session

Trust me, The Valley is a carp anglers dream! It has fish to over 42lb, at least ten 30’s and countless 20’s. It’s full of carp loving features including reeds, lilly beds, over hanging trees, undercuts, gravel bars, in fact loads of different spots to set traps and get things working.

If 2019 is anything like the previous two years, the fishing is going to be epic on these lakes. Just flicking through the catch reports you can’t fail to be impressed by the quality of fish and the numbers which came out. In fact over 40 carp just shy of 42lb graced the banks and many, many more just shy of 30lb.

Only last week I was down on there with a client of mine Laura, who wanted to improve both her feature finding and watercraft skills. There was only one place I was going to take her – The Valley Lake! It was a great day she went home one happy angler having learned loads and even managed to get the rods out for a couple of hours landing this stunning mirror from the Car Park Lake- one of the best lookers in Essex that’s for sure!

It still amazes me how in this day in age with more carp anglers about than ever more haven’t cottoned on to this hidden gem.

With tickets available from as little of under £400 for the year and all the Fryerning facilities and the Car Park Lake that come with it with it it also represents incredible value for money. If you are considering becoming a member don’t hesitate in getting in touch with the guys on 01277 352245 to check if syndicate places are available!

February started off a little subdued, with freezing conditions, snow and ice on the lakes that was soon forgotten after a flurry of carp were landed from all three lakes.

Up on the Main Lake no stranger to the catch report book, and star of last month’s blog, Keith Mann got tongues wagging, landing three carp in an action packed session including a mirror of 35lb and a cracking 27lb common. The ‘Mann’ is certainly on fire! 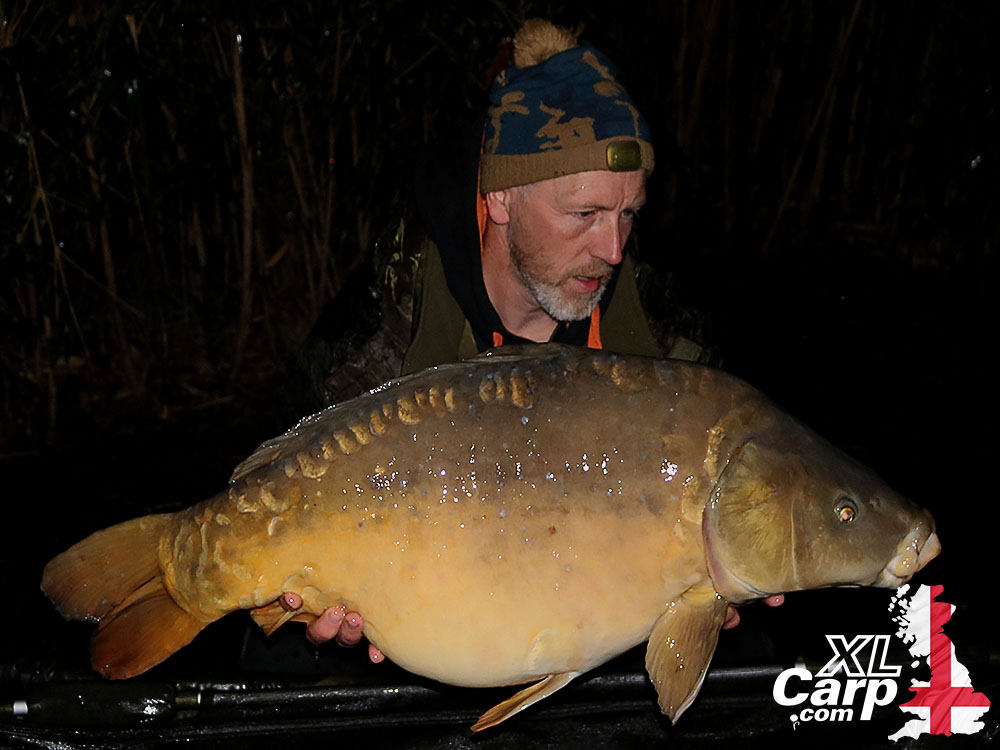 On form Keith Mann with a cracking 35lb common

Ever Jovial Chris Moore also had a hit, landing a trio of its residents with the much sought-after Dalmatian at 36lb 12oz, the incredible looking yet rarely caught Starburst at 32lb and a mint looking common of 27lb. 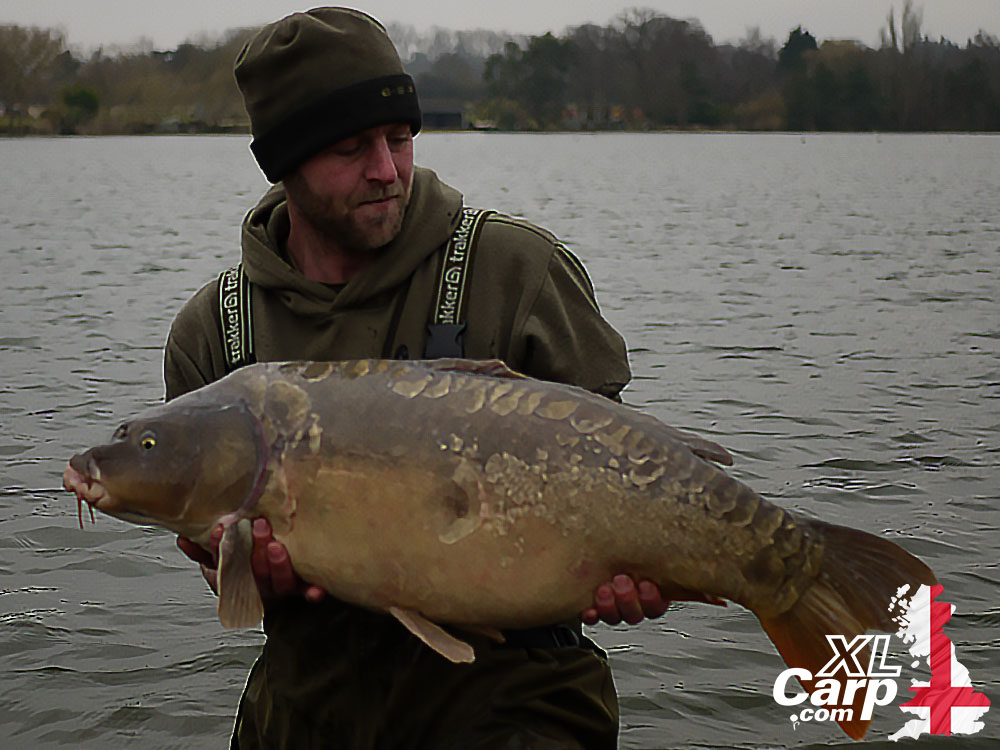 Chris Moore with Starburst at 32lb, part of a trio from The Main Lake

A fish any angler wants to land and certainly one I have set my heart catching also made an appearance this month. Thomas More became the envy of anglers all over the UK when he landed the Woodcarving at over 43lb. It was great to see the fish looking in fantastic condition and she looks set to pack the pounds on over the coming months. Awesome stuff that man! 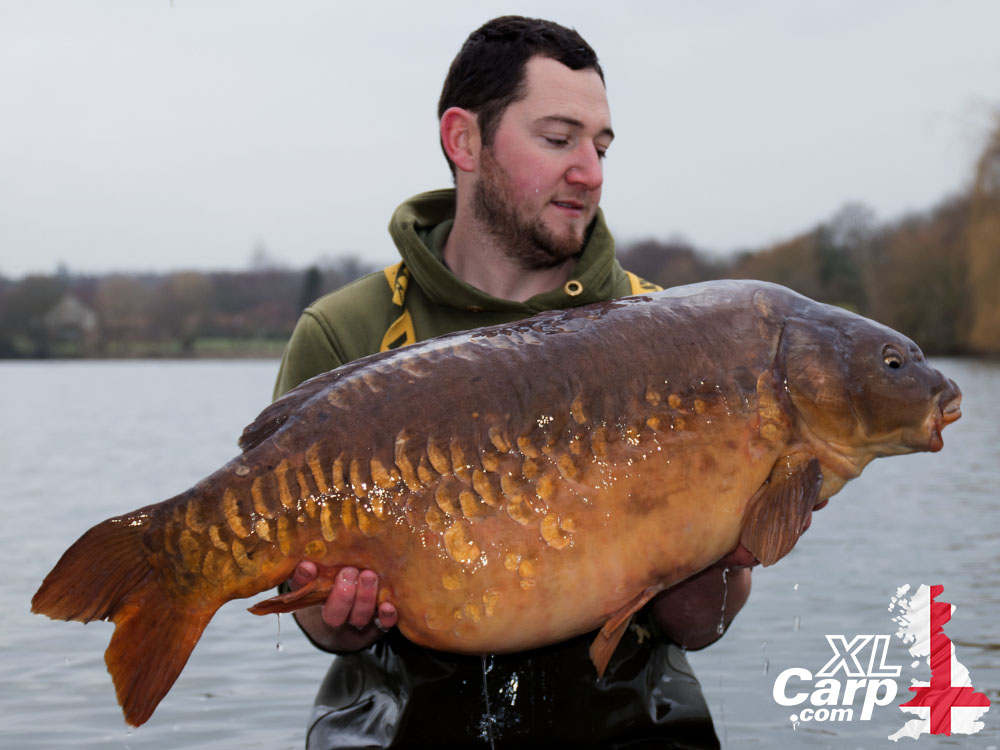 The finest mirror in the UK, The Woodcarving

Zak Culleton certainly had a memorable session when he broke his duck on The Main Lake by landing 4 scale at 40lb 2oz. Smashing his P.B. This was made even more sweeter as he did it in the company of his son Freddie. Excellent stuff guys! 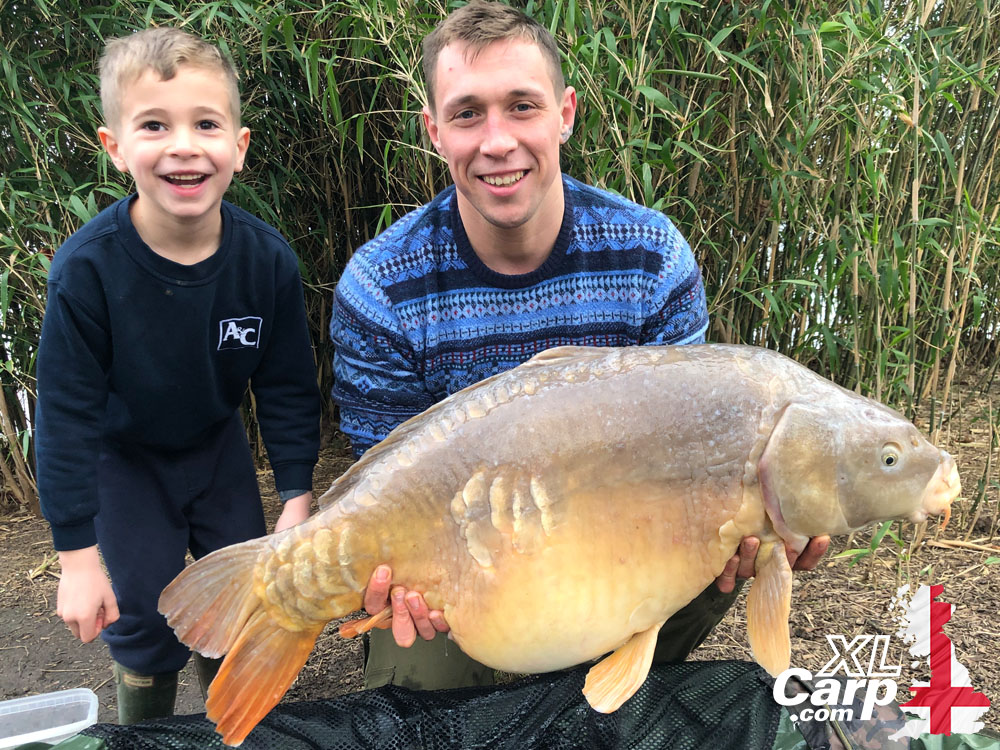 Happy days, Zack and Freddie with their new P.B.

Only days ago Jim Buffoni took full advantage of the balmy weather we have been experiencing landing a magnificent brace of 40’s with Berties Linear at 40lb 4oz, The Emperor at 44lb and a 18lb common.

Jim Buffoni with Berties part of a trio of 40’s

Scott Clark consistent form certainly can’t be argued with, his fish catching ability has seen him feature in all three bogs and this month he’s in again with the aptly named Prettyone at 39lb 10oz. Caught just two days ago I would not be surprised to see him in next months as well, that is how highly I rate the bloke! 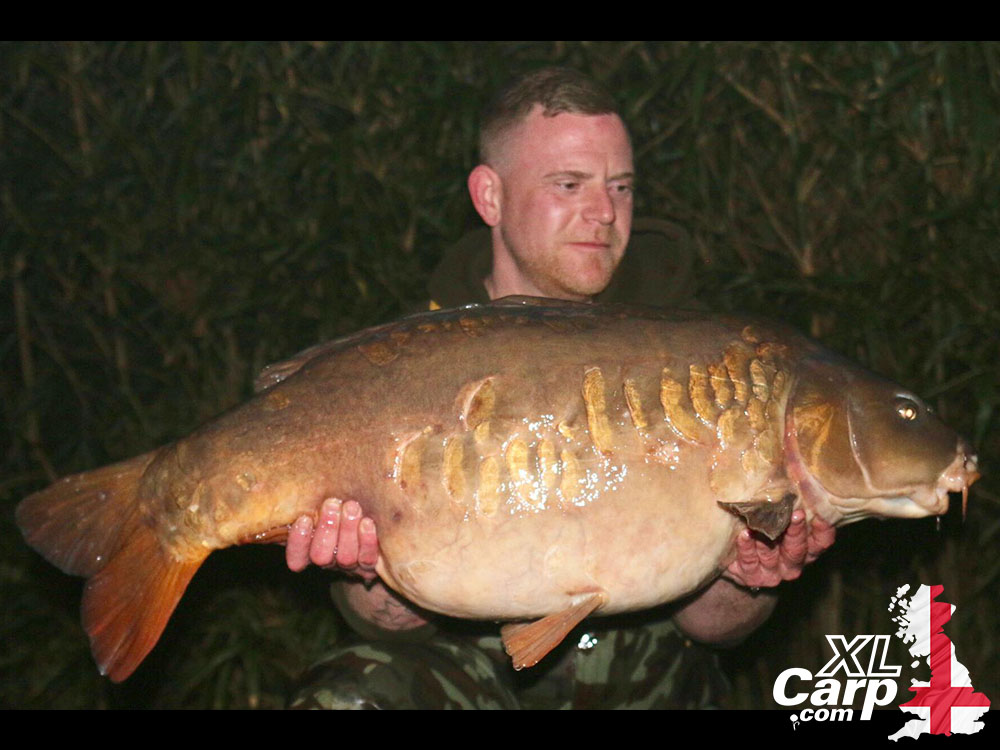 Scott Clark, at it again this time with Prettyone at 39lb 10oz

The Valley has seen few anglers on it since before Christmas which explains the fewer catches to report but those who have been down have been rewarded. Gary Moffat had a great result landing a cracking 27lb 8oz common. 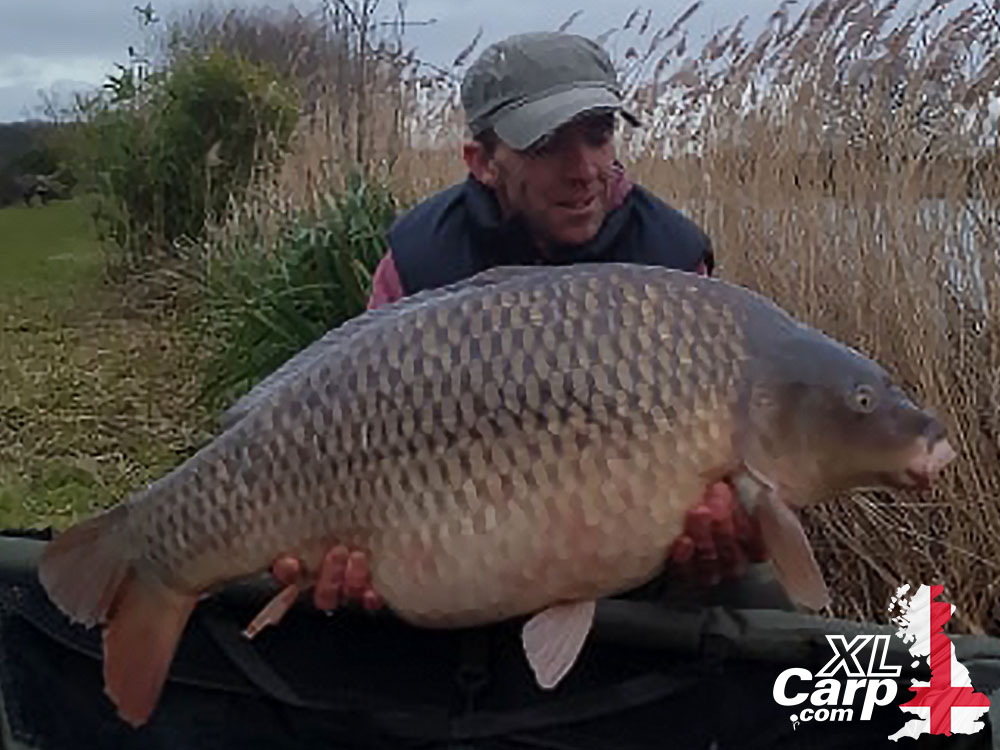 The Car Park Lake as ever has produced the goods even during the coldest of conditions and Dan Haselton took full advantage of its consistency landing six amazing looking carp up to 15lb in a couple of hours! Winter action of the highest calibre that’s for sure! 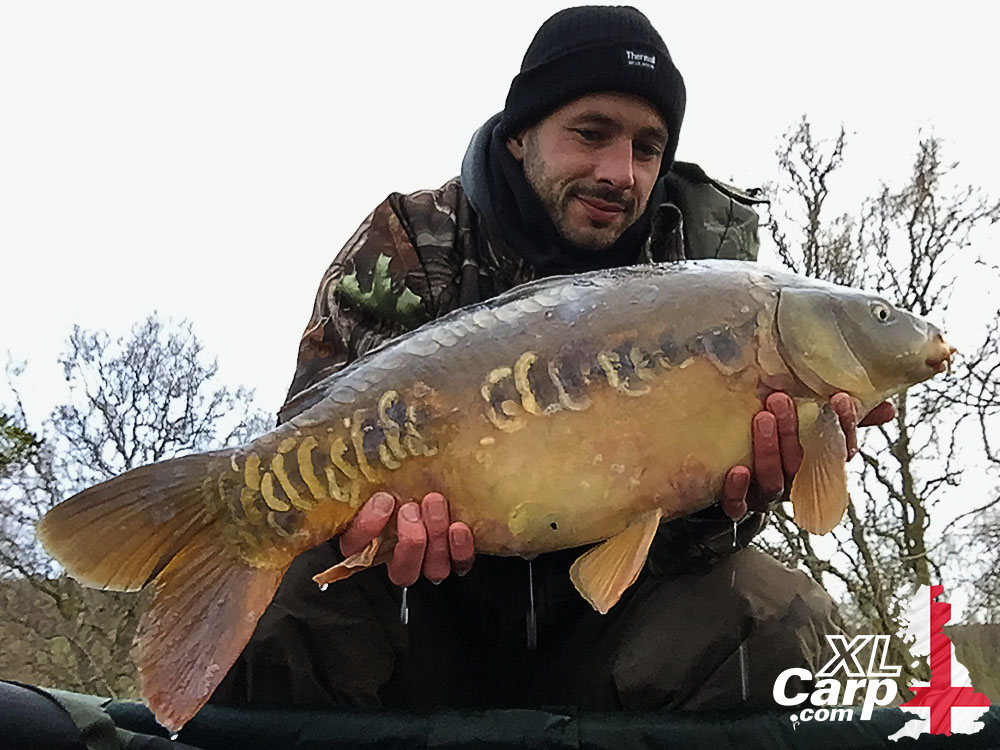 Dan Haselton with one of his six Car Park Lake carp.

To have the amount of big carp and be a successful fish farm like Fryerning is no fluke. The guys are experts at their game and knowing exactly how to grow these is through years of experience and 110% dedication.

Even though the lakes at Fryerning are spring fed and boast the best quality water and PH levels for carp, the team aim for that step higher! By adding barley straw to all the lakes and stock ponds the guys achieve this!

Straw is placed into mesh and sausages of straw created, which are then placed around the various lakes and ponds to do their magic. Like I said the guys here won’t sit on their laurels and settle for second best, mark my words the water quality here at Fryerning is the best. Good water = happy carp = big healthy fish!

Following on from last month’s update I mentioned how the team have been drastically reducing the bio-mass in aid of increasing carp growth weights.

To increase the efficiency whilst netting the guys have constructed a custom silver fish net, which features a fine mesh, increased lead line and addition floats.

This is a serious bit of kit which I’ve seen with my own eyes and it is a different league to anything else out there.

Also controlling fish numbers this month were 17 Egrets and a Bittern which descended on the Lakes. A great site and any ornithologists out there will tell you these are very rare occurrences! the Forna and flora at Fryerning is something else the habitat Chris and Charlie has created down here is something else and its only going to get better! Remember guys, its only February and things are only going to get better!

Well that’s it for this month, don’t forget to keep logging on to the website www.xlcarp.com and checking out Facebook, Twitter and Instagram for all the latest catches and news. They are updated daily so make the most of them See you next month when I will guarantee we’ll have more carp and news to report!